UK in the EEA? 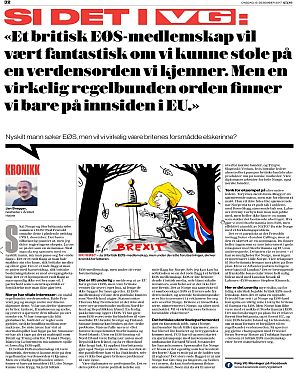 Should Norway and the United Kingdom team up in the EEA? Paal Frisvold reviews this proposition in glowing terms in Verdens Gang [Norway’s 2nd largest newspaper] on December 1st. It may look like an obvious winner - but I share the Solberg government's skepticism. Let's look at it as a divorce. If you want to form a relationship with a recently divorced man, watch out for red flags. Disparaging the ex-wife is a red flag, like the British media and elites do to the EU.  Being unreasonably stingy about child support is a red flag, like British decision makers are about transition payments. Not knowing what you want is a big red flag. In relationships, like in foreign policy, commitment is something that is not taken lightly.

Norway has vital interests in a stable, rules based world order. Both Frisvold, I and many other Norwegians understand this. We allow ourselves to be charmed by the British, Germans, French and others - and we try to charm them back in our Norwegian way. For many decades we have been globalized because certain rules apply and not great power bullying. The past few years have shown that the great power game can arise again. Small states have everything to lose by the raw display of power that Brexit and Trump stand for. We the little ones in Norway, Iceland and Lichtenstein must play a reasonable EEA game together.

It's a strange choice to exit the EU to enter the EEA - but our British friends get to control their own house, as long as they do not make their fences are not too high. An EEA membership will solve the Gordian Knot of Northern Ireland. Prime Minister Theresa May supposes that there should be no new barriers between Northern Ireland and the Republic of Ireland. The EEA represents a pre-packaged solution. We have close relations with our Nordic EU brothers Sweden and Finland through the EEA. The same solution can be used for the "Irish problem". Let’s be mindful that the state's full name is "The United Kingdom of Great Britain and Northern Ireland ". Without an EEA solution, Northern Ireland will be dangerously close to union with the Republic of Ireland - and Scotland will not be not far behind. A fragmented United Kingdom also makes Norway weaker. These Nordic-Irish parallels we might have in the back of our minds, even if the UK’s problems are not our own.

A British EEA membership would be wonderful if we could count on the rules based world order we know. But a truly safe regular world order is only found inside the EU, where Norway could be safe. I say a provisional Yes to UK EEA membership, but under the right conditions.

Our diplomats are professionals - it's their job to warn about some political red flags. Even an armchair politician can see some red flags in a British EEA membership. The EEA is weakly presented in British media, even among Remainers. The fact that Norway must consent to UK membership in the EEA seems absent from their minds. Decision makers aren’t interested in promoting themselves to Norway. The British are introspective, uninterested in Norway, and have their own internal problems. Do we really want to be forsaken mistress to the British?

The British Foreign and Commonwealth Office is doing a great job, in Norway and elsewhere. Ambassador Sarah Gillet is charming, yet has little concrete and reassuring to say. FCO has even started a charm offensive with incoming ambassador Richard Wood 8 months before arriving. The question for Norway is: who’s really in charge? Can we trust their adherence to rules? The big red flag may show up when the British ring is on Norway’s finger, and UK policy makers show their muscle. Who will  then be accountable to Norwegian farmers, and Trygve Slagsvold Vedum, if British leaders force-feed British agricultural products into Norwegian markets? Our diplomats work for all of Norway, including Norwegian farmers.

Consider the question of alternate leaders. Jacob Rees-Mogg is a charming man, but is an unapologetic representative of elite power. He will not be quite so charming when Norway has to grab her ankles and bend over, with Rees-Mogg moaning behind us. We may find Labour's Corbyn more flexible, but he is not exactly a poster boy for the status quo. What do we do if Britain is in the EEA, but an ineffective member of NATO? We may have a delicate problem on our hands.

It is a paradox that Frisvold's piece is called "London calling", but it is written by a Norwegian. You will find no one who is more interested in good relations with the UK and the EU than me. Our debate is internal - we can see opportunities for Norway, but nobody is interested in little Norway. Our relations with the UK need more care on several levels. Where are the Labour Party's formerly close ties to London? It is reassuring that our francophile Jonas Gahr-Støre [head of Norway’s Labour] has recently visited with Labour’s EEA man Stephen Kinnock.

The situation is unusually risky and it is too early to uncritically welcome British EEA membership. But there is also an upside. Frisvold argues that Norway can play an important role in linking the UK to Europe through the EEA. But Norway and the other EEA countries can not stand alone with an insecure UK in the EEA. There must be assurances in place from a relatively united United Kingdom, and a united EU, that one is still committed to a rules based world order. I will gladly crack open a bottle of champagne with Frisvold in front of Norway House on Trafalgar Square if British EEA membership is the end result.