We are all Irish now - Is Éireannaigh sinn uile 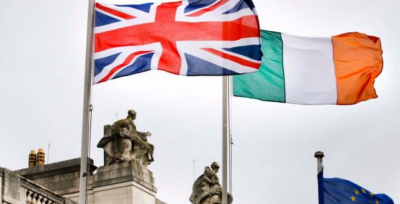 Norway must stand together with the EU in supporting Ireland. Imagine that Sweden went crazy - Jimmie Åkeson of the fringe party Swedish Democrats takes over, and scares the Swedes out of the EU in a referendum with the lowest possible margin. Picture a  negotiating table,with our Foreign Minister Ine Eriksen Søreide and newly appointed Foreign Minister Björn Söder. The list of requirements is impossible, and an EEA solution is out of the question. Sweden is our largest export partner and source of foreign labour. Swedish-Norwegian history is long and complicated, but has been friendly. What do we do?

This is what Ireland is facing. The parallels between Norway and Ireland are significant. We both had a long and complicated nation building history, with a weak central state early on and came under foreign domination. We became independent almost at the same time - in 1905 and 1921. Norway has been lucky geographically - Norway's independence  is in no small part explained by Western Norway's rugged mountains. Our Irish friends have a far more complicated relationship with their big brother UK. Ireland is not one of our neighboring countries, but is our neighbour’s neighbour. As Ireland is treated by the UK, we will be treated in our turn.

Whatever you think about Norwegian EU membership and the EEA agreement, we must support the EU's solution. If Britain wins this case, extremists will smell blood. It will not be long  before slick Mr. Jacob Rees-Mogg's knock on Norway’s door with overwhelming volumes of British agricultural products and more. Might will have won over right. Everyone will lose, not just Norwegian farmers and the Irish economy.

A hard border on the island of Ireland also threatens the United Kingdom’s  future as an integrated nation. The public support in Northern Ireland for reunification with the Republic of Ireland has increased. A hard border, and especially a "no deal", will cause major problems in Northern Ireland. The support for a united Ireland can slide beyond a point of no return. Our own experience from 1905 shows that one can not hold a union together with military force. Scotland is also shaken by the harsh tones of Brexit negotiations. Scottish independence and Irish reunion could be a fact shortly after a chaotic Brexit. A United Kingdom is a better solution for Norway than a weak Scotland and England. We must save Britain from extremists who risk tearing the country apart.

Britain's approach means that even a reasonable solution like EEA membership is a headache for us. The headline of Brexit in the history books will be an attempt at "More for me, and less for everyone else." Even their sensible pro-EEA faction is obviously aware of the  kind of influence the British will have. Their rhetoric on the EEA Agreement, Articles 112 and 113, suggest an emergency brake on immigration that will not benefit Norway. An EEA membership for the UK will be demanding for Norway, but with the EU’s support we can do it.

It is both an advantage and disadvantage that the British are divided and difficult. The advantage is that we, together with the EU and only with the EU, can avoid the worst harmful effects. The downside is, of course, that a close ally is self-harming itself and is torn apart by strife.

An atlantic block is a possible solution. Nordic cooperation  is accelerating. Why not export and expand a good idea? An Atlantic block with a united Ireland, Scotland and the North-Baltic region is currently only fiction, but what if? The Nordic region can stand as a counter example to the world’s centrifugal tendencies.

A glass of Guiness always hits the spot, but tonight we should all visit the nearest Irish pub. Today we are all Irish.